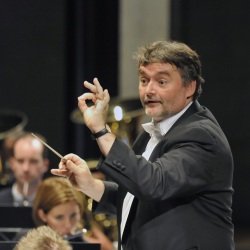 He studies Piano and Trumpet then he continues his education in theory, chant and orchestration at the «Conservatoire de Fribourg ». There he also obtains a teaching diploma for musical education for senor classes.

Jean-Claude Kolly starts his career as musical director with the choir Lè Tsèrdziniolè from Treyvaux, in 1984 he is appointed to direct the Gérinia of Marly.

During three years he conducts the Harmonie municipale de Vevey and during seven years the Brass Band Fribourg.

He conducts at La Concordia since 1993.

Constantly searching to improve himself he had the possibility to work on international level together with Eugen Corporon (USA), Howard Snell (GB), Keith Wilkinson (GB), Derek Bourgeois (GB) and Henk van Lijnschooten (NL).

Frequently, he is committed as expert for musical regional, cantonal, national and international contests. At these occasions he also has to possibility to perfect himself as expert by the exchange with other members of the jury.

Jean-Claude Kolly teaches at the University of Lausanne (HEMU) and at the Conservatoire de Fribourg the lectures for musical directors for amateurs as well as for professional students (Bachelor and Master level).

He was committed by the CISM for the professional formation of jury members for musical contests.